2019 was a great year for No Excuses CrossFit. Check out all we accomplished this year. 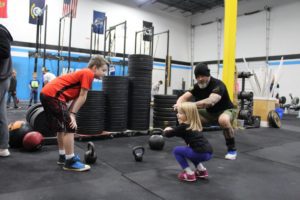 January: We wanted to add more chances for the members to spend quality time with families and we love being a family-friendly gym with lots of active moms and dads so we kicked off the new year with our first ever Family WOD day. In addition,
we also hosted the first Granite Games Throwdown of the year, which drew 36 teams, led by No Excuses CrossFit with 11, in four different divisions. Finally, the 5 AM class was such a hit, we officially added it to the Monday-Friday class schedule.

February: February was also a busy month for us. Orphan Aid Liberia traveled to our gym to sell “shirts with a purpose”. All proceeds went to help feed the children in Africa. Coach Yessica held a Valentines Cookie Decorating Party for the lady members at the Laurel Park Clubhouse. Our second competition of the year went down with the Garage Games Masters Championship. And finally, the end of the month started the first Friday Night Throwdown and CrossFit Open 19.1. 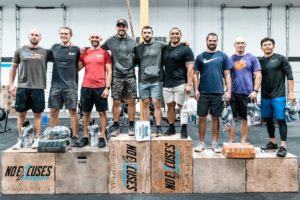 March: The CrossFit Games Open was the highlight of early 2019. Beginning on Friday, Feb. 22 and every Friday for the five weeks during the CrossFit Open, we hosted Friday Night Throwdown (19.2, 19.3, 19.4, 19.5). Power & Grace Performance, a group of professional weightlifters who travel the US and the world in Olympic weightlifting meets, joined the No Excuses family.

April: D’Anna Klinger of Ortho Restore Physical Therapy offered the members a shoulder mobility clinic. The class covered some movements you can use to protect, warm up, and recover your shoulders so they feel good and work better. The men had some quality bonding time and went to Don Carter State Park for the 5th annual Men’s Camping Trip. It is always unknown what truly happens that weekend. 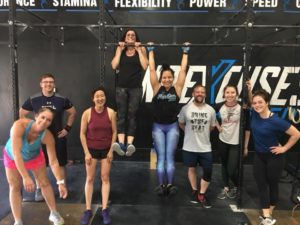 May: Erin Criswell from Power & Grace Performance hosted a Gymnastics Clinic for the members that covered handstands, handstand pushups, and handstand walks. We finished up the month taking on Memorial Day Murph in honor of Lt. Michael Murphy and all of our fallen heroes that have sacrificed for our freedom.

June: To start off the Summer, Power & Grace held a Clean Seminar. The class was a big hit and sold out within a few days! 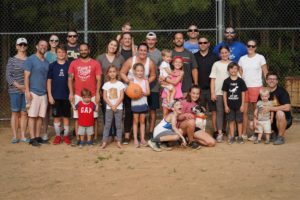 July: Our members had a fun-filled family evening of food, fellowship, and a nice game of kickball at the Family Kickball and Potluck.

August: Our friends from Power & Grace held a Jerk Seminar for the members. Once again, the class was a success and sold out within a couple days. In an effort to cool off from the Georgia heat, we had our annual Lake Party on Lake Lanier. The No Excuses CrossFit community came together on Saturday, Aug. 24 for its annual in-house competition — the Hugo Open, now in its 6th year. The event drew 60 athletes. Team of 5: Mike Jones, Dimy Jeannot, Lindsay Morris, Ethan Darcy, and Kim Benson took home first place!

September: We started the month off with the Annandale Village 5K race at Suwanee Town Park to help raise money for a great cause. Annandale Village has been training with us at No Excuses CrossFit twice a week for the last four years. No 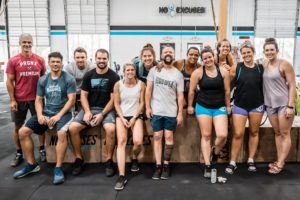 Excuses CrossFit members, Mauricio and Miriam invited everyone to their home for a pool party to try and beat the heat. An authentic taco bar was served. We hosted the Granite Games Fall Throwdown competition on Saturday, September 14th. The event drew 42 teams, led by No Excuses CrossFit with nine, in four different divisions.

October: Long-time coach, Chris Fischer stepped down as the head coach due to positive changes within his family. Chris had been the head coach at No Excuses for more than five years and has been an integral part of the gym’s success over that time. Former member, Roman Berkhan, took over as Head Coach at No Excuses CrossFit in October. For the first time ever, the CrossFit Open was held two times in one year. This time, the gym changed it to Saturday Morning Showdown instead of our usual Friday Night Throwdown. 20.1 started on October 12th and went on for the following 5 weeks.

November: The CrossFit Open finished with 20.4 and 20.5 in the first two weeks of November. With Roman as the new coach, some exciting and new Benchmarks were added into the mix. 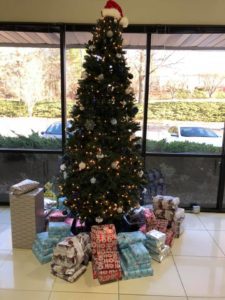 December: We ended the year by celebrating eleven years as a CrossFit Affiliate. Instead of hosting our annual Birthday Bash, we combined it into the final Granite Games Throwdown competition of the year. With the money raised, we were able to provide 15 children and seniors in our community through the North Gwinnett Co-Op with Christmas gifts.

Mercedes and Corey Brindle welcomed their daughter Emma in May.

Ashley and Addison Williams welcomed their son Julian in June.

54 – Percentage males that train at No Excuses CrossFit

46 – Percentage females that train at No Excuses CrossFit

17 – Number of couples that train at No Excuses CrossFit

11 – Number of years No Excuses CrossFit has been affiliate, the longest in Gwinnett County.

10 – Number of years Greg Hayes and Leslie Brigman have been members of No Excuses CrossFit.

7 (part 2) – Number of couples that have met their spouse at No Excuses CrossFit.