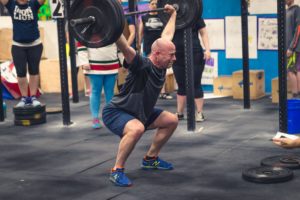 Nathan Rushin has had a few set backs along the way during his CrossFit career. The biggest was in the summer of 2015 when he found out he had an 80% tear in his right rotator cuff. He used the remainder of the year to recover from his surgery. When he returned to CrossFit, he spent the first 3-4 months doing the Essentials programming, which still involved a lot of modifications and scaling. It wasn’t until the fall that Nathan began to regain his strength and moved back to Fitness. All of his hard work and patience paid off during 17.3. Nathan was one of the few people to finish the workout under the time cap in the scaled division and he did so by hitting a PR in his snatch at 155 pounds three times.

Nathan’s perseverance is what CrossFit is all about. You’re going to have highs and lows, but you have to keep fighting.

Congrats Nate! We are very proud of you!