January: We kicked off the year with a Gwinnett Affiliate League Team competition. Teams of 4 competed in three workouts at No Excuses. We also hosted a USAW Sports Performance clinic and launched the Nutrition Throwdown. Our membership was gearing up for the competitive CrossFit season that was just around the corner! 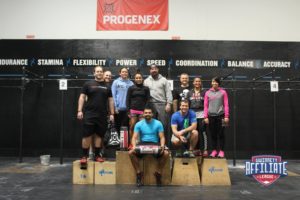 February: We got into the competitive spirit with our Open Prep class. Members met on Fridays in February to work on skills and movements that are commonly seen in the Open. We kicked off the Open season on the 27th with Friday Night Throwdown!

March: The CrossFit Games Open was the highlight of early 2016 with 78 members participating in the worldwide competition. This year we launched a Team Component of our in-house Friday Night Throwdown. Participants were placed on one of four teams: In WOD We Thrust, Original Gainsters, Bomb Dot Com and Barbell Brigade. In WOD We Thrust won the in-house team competition, while No Excuses ranked 96 out of 368 teams in the Southeast. We raised $500 and collected 1,321 pounds of food for the North Gwinnett Co-op. 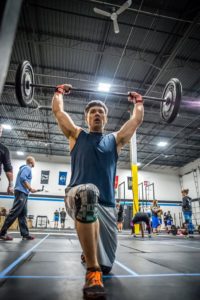 The CrossFit Open put us through five grueling workouts.

April: Spring sprung and we welcomed the warmer weather! We launched Skillz and Drillz for those athletes that wanted time with more focused skill work. We also welcomed Betsy Pake and her Nutrition Ninja seminar. The Men’s Camping trip took place the last weekend in April. You’ll have to ask the guys about that one!

May: The Atlantic Regional took place in Atlanta and we had a group of members make the trip down to watch some high-level CrossFit!  The ladies got together for a Night Out and used their fitness with some bowling!  On Memorial Day we gathered at the gym to Honor the Fallen by participating in the workout “Murph.” We had 78 athletes in the gym at one time throwing down on various versions of this infamous WOD. In May, we also helped raise money for the North Gwinnett Co-Op’s summer food program.

June:  In the spirit of friendly competition, we launched our first Summer Series. Saturday WODs were designated as Team Series workouts with top scores from each team submitted into the final team score. We had 5 teams participate and Beards and Babes won the 5-week series.

CrossFit Kids Summer Camp was a hit, complete with themed days and water balloons! We also packed lunches for Street Grace, which helped provide lunches for vulnerable kids who might not have access to food in the summer.

July: No Excuses went out to the old ball game in July and cheered on the Gwinnett Braves. The gym was getting hotter and we were gearing up for our August events!

August: We closed down the summer vacation with our 2nd Annual Boat Party. This year, we rented out “The Executive” and cruised the high seas of Lake Lanier. Details of the boat party are shrouded in mystery as many participants have taken the vow of “what happens on the boat, stays on the boat.”

The Hugo Open, our fiercest and friendliest competition, took place on August 20th. We had 69 athletes participate on 23 different teams. This athlete turnout was just shy of the participation for Friday Night Throwdown! Instead of doing multiple divisions, we had many first time competitors and seasoned veterans all competing together. We also had two Teen teams for the first time in Hugo Open history. WOD Heroes won the competition, while Honey Badgers was second and Fox and the Hounds was third.

Kyle Maynard shocked us all when he was featured in a Nike commercial that aired during the Rio Olympics!

October: No Excuses hosted the first ever Gwinnett Kids Affiliate League event. We had 25 kids ages 5-13 from 4 different gyms each doing three WODs. It was encouraging to see the future of CrossFit all enjoying movement and the spirit of the sport!

Our ladies event was active and fun! A group of ladies from the gym used their fitness to take on a new sport, Rock Climbing.

In October we kicked off the 6-week New You Challenge with over 30 ladies getting a taste of CrossFit! Some of these ladies have since become members!!

November:  In the spirit of No Excuses, we got together to help out our community. The gym was able to provide Thanksgiving meals for 10 families in the area through North Gwinnett Co-Op.

December: We wrapped up the year by celebrating Birthday Bash VIII. We hosted our biggest competition to date, with 22 teams from 10 different gyms participating. Because of our corporate sponsors and the teams that participated, we were able to raise $5000 to provide Christmas gifts for 11 children and 4 senior adults in the Suwanee, Buford and Sugar Hill communities.

Our first ever CrossFit Toddlers class took place at the end of the year! It was adorable chaos!

2016 was a great year for No Excuses! We are looking forward to seeing what is in store for 2017! Thank you to all our members who have chosen to make No Excuses your gym home! We couldn’t do this without you!!