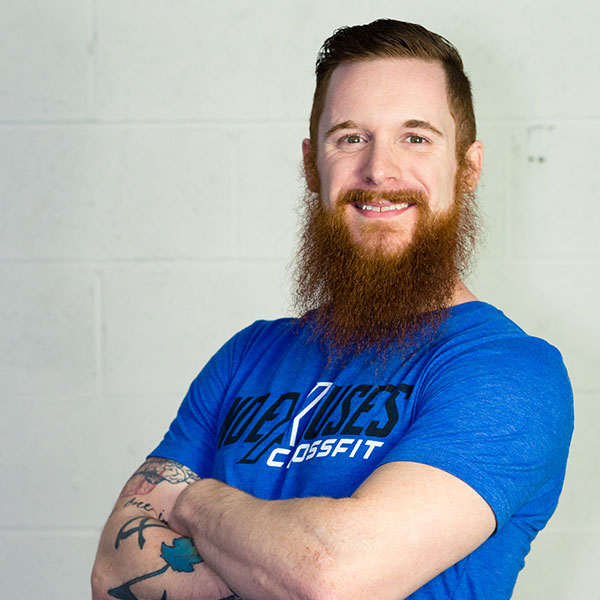 AROUND THE WHITEBOARD with ADAM REESE

Favorite Workout Song: Silence – “If you need music for training, you need to find a new hobby” – Josh Everett

Do you have a background in sports? How did you get started in those activities?
“Yes, my father is a High School coach (football, wrestling, gymnastics, soccer, etc) and has a degree in Physical Education. So, my brother and I were always exposed to sports. I started playing T-Ball when I was just 4 years old.”

When did you start coaching?
“I started coaching, professionally, when I was 18 (2007). I also had a lot of experience coaching youth camps, and even a youth baseball team, in high school.”

What do you love most about coaching others?
“Helping people achieve their goals, or even something that they previously thought was impossible, is always invigorating! And there is something very special about witnessing “the light bulb turn on”, as they say. When an idea, concept, or technique finally clicks with someone, I’m reminded why I love what I do!”

You’re our resident lifting coach; how long have you been weightlifting and how did you get started in CrossFit?
I started Weightlifting in 2008, under Caleb Williams. I had been training for baseball with Caleb (a World Champion Powerlifter and National Champion Weightlifter) for about 2 years prior, so I was exposed to barbell sports with him. I actually started my lifting career as a Powerlifter in 2007, which came with 4-5 days/week of training. So, I was spending A LOT more time in the gym, and as a result, Caleb asked me to help him coach some of his younger athletes (cross training, very similar to the approach of a competitive CrossFitter). After about 4-5 years of this, and an expertise in 5 very important movements in the CrossFit community, we felt comfortable transitioning into coaching the CrossFit community. So, in 2012, we merged with CrossFit Gwinnett, and I’ve been an addicted CrossFitter ever since!

What are the main differences between weightlifting as a sport and using the lifts in CrossFit? How do the two compliment each other?
“The differences in Weightlifting and CrossFit are extensive enough that I could probably write an entire article on that alone. However, the BIGGEST difference(s) that I have seen, in my experience, is the approach (often expressed through rep schemes). In Weightlifting, the idea is 1 attempt at MAXIMAL weights! Being that the movements are highly technical, there is A LOT of mental focus on perfect execution to maximize the accuracy and force of the explosive output. However, with CrossFit, we generally try to ration our explosive energy, in an attempt to execute the required rep amount as efficiently as possible. In other words, the weights usually aren’t as heavy, so we want to focus more on being PERFECT, and not as much on being super explosive, on each rep. This allows us to execute rep amounts of 10, 20, 30, or even more, with good technique, on EVERY rep!”

“These can complement, one another, however in a few ways. 1) In Weightlifting, we achieve perfection by executing as many perfect reps as we can, regardless of weight. So, if the loads we are using in CrossFit are meeting this standard, in theory, we will train our neuromuscular pathways (muscle memory) in a much shorter amount of time. 2) In addition, if we are using weights/loads that are simultaneously challenging, from a strength perspective, that could also train our body to recover, quicker, from one heavy attempt to the next. This is why it is important for someone, who moves well, to continue to challenge their movement quality with loads that are challenging. However, someone who does NOT move well should focus on achieving perfection with lighter loads, before attempting to progress to loads that could lead to poor form. So, whether you’re Weightlifting or doing CrossFit, it’s imperative that you receive quality coaching, especially from a technical standpoint!”

What impact has CrossFit/the barbell had on your life, lifestyle, and level of fitness?
“As a smaller athlete, barbell sports and CrossFit have shown me how uneven my playing fields have been, throughout my entire athletic life! Football, baseball, hockey…those are sports that almost require size! But, as a 135lb kid, discovering a sport that is based on weight classes (and another that incorporates all aspects of athletics) gave me a reason to try something new. I always knew about wrestling, which I trained very seldom, with my father. But, I started lifting barbells when I was just 8 years old. By the time I hit high school, my experience with a barbell forced me to lift with teammates that were 10, 20, sometimes 50 pounds heavier than me, simply because my technique had many more years of development. However, at no point did I realize that there was an athletic and competitive world out there, designed for this very thing! So, after quitting baseball, at age 18, I was convinced I would never compete in sports again. Powerlifting, Weightlifting, and CrossFit gave me a new reason to be an athlete and a competitor! They gave me a reason to stay motivated, and they gave me a reason to continue to set goals for myself! I am convinced that I would have gone down a much more self-destructive path, after high school, were it not for my discovery of my passion for barbells and general fitness! I will, forever, be grateful to Caleb for encouraging me to try it!”

Tell us about a CrossFit (or weightlifting) moment or achievement of which you are particularly proud.
“There are several, that I often discount, that I look back on very fondly. But, I guess the 1 moment that stands out the most occurred the day that I hit a 132kg Snatch, in training, from a set of thigh-high blocks. Here’s the back story:

My mentor, Caleb Williams, was someone who I looked at as somewhat of an anomaly. Aside from a 722lb Squat in competition, as only a 148lb Powerlifter, I got to witness Caleb achieve lifts, in person, that would blow the average mind! This man was a FREAK, and this man was my mentor! I trained EVERYDAY, for 7 years, with arguably the strongest human being I’ve ever met! Well, as a Weightlifter, 2 of Caleb’s very notable achievements were American Records in the Clean & Jerk, as well as the Total (which is the sum of the best Snatch and Clean & Jerk from that one competition). The road to achieving his American Record Total featured a Personal Record Snatch of 130kg in the 69kg Class (just 5kg shy of the American Record Snatch, at that time).”

“Well, in June of 2015, I had a chance to redefine “impossible”, for myself. During a FREAK Snatch training session, weighing only 72kg (only 3kg above the 69kg Class), I proceeded to achieve Snatch weights of 120kg, 122kg, 125kg, 128kg, 130kg, and finally 132kg. Every one of these successful attempts was a Personal Record, at the time. But, the one that hit me the hardest (even brought me to tears) was that 130kg Snatch! Though it was in training, and though it was from blocks, and though I was heavier than 69kg, in my eyes, the IMPOSSIBLE (being as strong as my mentor, in some capacity) had finally been achieved! It kinda brings tears to my eyes, just typing it.”

What is one goal you have yet to achieve but are working hard towards?
“Finishing The CrossFit Open in the Top 1,000 of my Region.”

What are your hobbies and interests?
“Music, stand-up comedy, MMA, skateboarding, animals, and hiking. In my youth, I considered myself a bit of a Renaissance Man. As a result, I’ve competed in everything from sports to theater to art. At age 12, I was one of the nations top ranked Male Solo Tap Dancers in the 12-18 age group, and at age 14 had a piece of computer art qualify for the Georgia State Tapestry Competition. I even had a high school rock band, at age 17, win a grand prize of 12 hours of free recording time in a Battle-of-the-Bands competition.”

What are you passionate about?
“Music, barbells/fitness, teaching, performing, animals. I tend to carry a level of passion through most of my life. My general approach to life is all or nothing.”

What is your advice for new members?
“My advice to ALL members is PATIENCE! I use this a lot in my Weightlifting philosophy, as well, but it applies to life! Be patient! Listen to your coaches/instructions, follow the steps necessary to achieve your goals, and be patient! Be CONSISTENT, as well, but don’t put unnecessary time restraints on potential life changes! Allow things to develop! Stay on the right path, even if that path seems a bit longer than you’d hoped or anticipated.”

You’ve had the opportunity to be involved at a few different CrossFit gyms, what do you love most about No Excuses CrossFit?
“No Excuses CrossFit carries itself with a level of professionalism, while balancing itself with a level of compassion and understanding, that’s very difficult to find at most CrossFit affiliates! Aside from the fact that 2 (3, including myself) of the staff are CrossFit Level 2 certified (as well as a plethora of other certifications and masteries), the community also provides a level of support and comfort that remind me why I fell in love with CrossFit, in the first place! Not only is the gym, within its own members and staff, incredibly welcoming and knowledgeable, but they constantly open their doors to the outside community, as well, by hosting multiple competitions and charity events, every year! Along with all of that, No Excuses CrossFit maintains a level of communication, both staff-member and staff-staff, that is crucial to the success of any fitness community! No Excuses knows it’s members, and No Excuses knows it’s staff!! For me, I can’t say enough about how important that is!”