2017 was a great year for No Excuses CrossFit. Check out all that we accomplished this year:

January: We kicked off the New Year with a jump rope clinic from Mute Sports and our first team competition of 2017. Metro Mayhem was a huge success with 28 teams from around the area competing in three workouts. 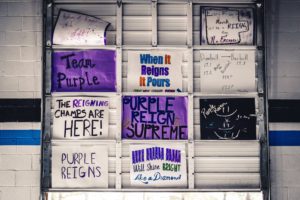 The infamous posters of FNT

February: Our Open Prep classes took place in February as everyone anticipated the start of the CrossFit Games Open and Friday Night Throwdown.

March: The CrossFit Open was in full swing! We had over 90 people do the Open this year including 11 kids and teens who participated in either the CF Open or the Garage Games Junior Championship. Purple Reign (3,849) took home the FNT Championship Trophy!  The standings were rounded out with runners-up Green Machine (3,010) followed by Red Dragons (2,493) and Blue Steel (2,049). 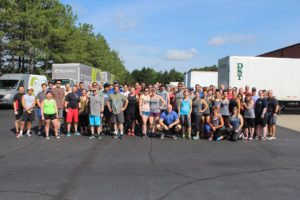 April: Coming down off the excitement of the CrossFit Open, we used April to catch our breath and prepare for the busy summer months ahead!

May: We started the summer months with the Men’s Annual Camping Trip the first weekend of May. We also hosted the Dirty South Showdown team competition, which drew 24 teams of competitors from across the area. We finished up the month with 82 of our members taking on Memorial Day Murph in honor of Lt. Michael Murphy and all of our fallen heroes that have sacrificed for our freedom. Nathan Rushin won the “Best Butt in the Gym” BBQ contest and we all enjoyed some good eats after a tough WOD.

June: In June, some of our crew traveled into Atlanta to watch the CrossFit Games Atlantic Regional competition. We also had a Braves social event where we loaded up a bus to check out the new SunTrust Park and cheer on the Bravos. 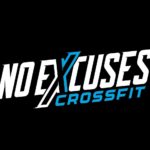 We unveiled the new logo in July of 2017

July:  Our beloved “Hugo” got a make-over as we revealed the new No Excuses logo. The old logo served us well from 2008-2017. The new No Excuses logo, designed by our own Mathew Shamloo started appearing everywhere from decals on walls and windows, to swag like hats, shirts and socks.

August: We changed things up this year and the 3rd Annual Boat Party turned into a Lake Party! We rented out a lakehouse for a full day of fun in the sun. You’ll have to ask around to find out “what really happened” at the Lake Party. 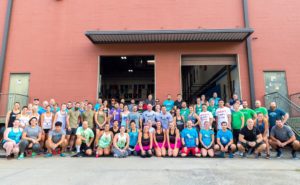 No Excuses members at the Hugo Open

Our 4th annual Hugo Open saw 21 teams take on three brutal workouts including the first time Assault Bikes had been used in a NECF competition.

September:  As a gym we were able to raise over $1,500 for the Kettlebells 4 Kids fundraiser, which provides homeless kids access to active play and fitness opportunities through their shelters. All of the money we raised went towards helping homeless families in the state of Georgia. We also had some of our members participate in the CrossFit Team Series, an online partner competition.

November: In the spirit of friendly competition, we organized the Battle of the Boxes competition to provide Thanksgiving meal boxes for families across the Suwanee, Buford and Sugar Hill areas. No Excuses CrossFit, CrossFit Axiom Athletics, CrossFit 30518 and CrossFit GATA all participated and collectively were able to donate 114 meal boxes.

December: We rounded out the year by celebrating nine years as a CrossFit Affiliate with our annual Birthday Bash competition fundraiser. Despite an unexpected snow storm the day before, Birthday Bash IX was still a success with 19 teams competing and raising over $5000 to provide Christmas presents for 25 children and seniors in our communities through the North Gwinnett Co-Op. 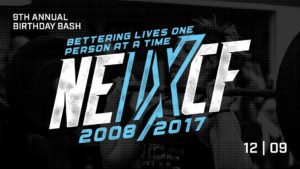 No Excuses CrossFit By the Numbers: