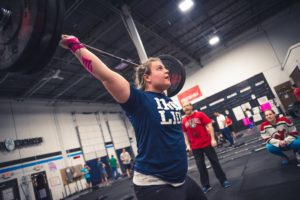 No Excuses CrossFit member Lindsay Morris performs a snatch during the CrossFit Open.

Lindsay Morris has had to remind herself each week during the Open to check her ego. It hasn’t been easy, but through her willingness to do the Scaled division it has kept the Open fun for her this year. That was evident during 17.4 when she crushed the first round of the workout and accomplished the rare feat of getting to the second round.

Lindsay has also been one of the gym’s most consistent judges during the Open. Over a three-day span, she judged 9 people for the 13-minute AMRAP, which is more than double the next most athletes judged by one person. To put that in perspective she spent almost two hours judging reps.

Lindsay’s willingness to put her ego aside and have fun with the Open, while being a tireless judge is what the CrossFit Open is all about.

Congrats Lindsay! We are very proud of you!