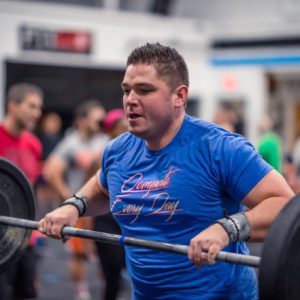 How long have you been doing CrossFit?
“Since February of 2016.”

How did you first discover CrossFit and what made you decide to start?
“I first saw CrossFit on the ESPN2 re-runs of the games. Conventional gym work was boring, and since becoming a sales rep I became more sedentary. I spent most of my time driving and did not exercise for almost more than 2 years.  I gained 70 pounds in a little over 3 years, and decided that enough was enough.”

Tell us about your sports/fitness background:
“I played Soccer for 13 years. I enjoyed playing flag football and worked out in your typical gym setting.”

What sorts of positive changes (mental, physical, emotional) have you noticed in your life since getting involved at No Excuses?
I have less stress, have lost 31# since last February, and I have a more positive mood in general.”

What keeps you coming back and motivated?
“To beat yesterday.”

In what other ways do you use your fitness?
“The everyday grind.”

Who or what motivates/inspires you?
“My wife and 2 kids.”

Please share with us a favorite CrossFit or No Excuses moment.
“Watching my son who has ADHD, Sensory Processing Disorder, and Autism Spectrum Disorder, smile while doing NECF CrossFit Kids and asking when he is doing it again.”

Name one goal you would like to achieve in CrossFit.
“I have a CrossFit goal of doing a Ring Muscle Up and a No Excuses goal of meeting the standards to move into Performance.”

Tell us about your hobbies and interests outside of the gym:
“Family, UGA Football, camping, and shooting.”

What advice do you have for someone just starting CrossFit or is on the fence about starting?
“First of all, it is not a cult…you will feel that you cannot do the majority of what others are doing, but by following the coaching and programing you will achieve things you did not think you were capable of! Mind over Matter!”

What do you love most about No Excuses?
“The community.”

Coach Laura’s Take:
“When Pablo got started it did not take him long to become “all in” for CrossFit. Pablo has made some major changes in his life since starting with us. Most notably, the way he has worked to dial in his nutrition. He has not only lost weight, but his performance is improving because of his nutritional efforts. It is clear that Pablo desires to improve and he puts in the work. He typically comes early to stretch out and usually seeks out coaching. Sometimes we have to hold Pablo back from what he wants to do, but overall as an athlete he is learning and improving and that is cool to see!”