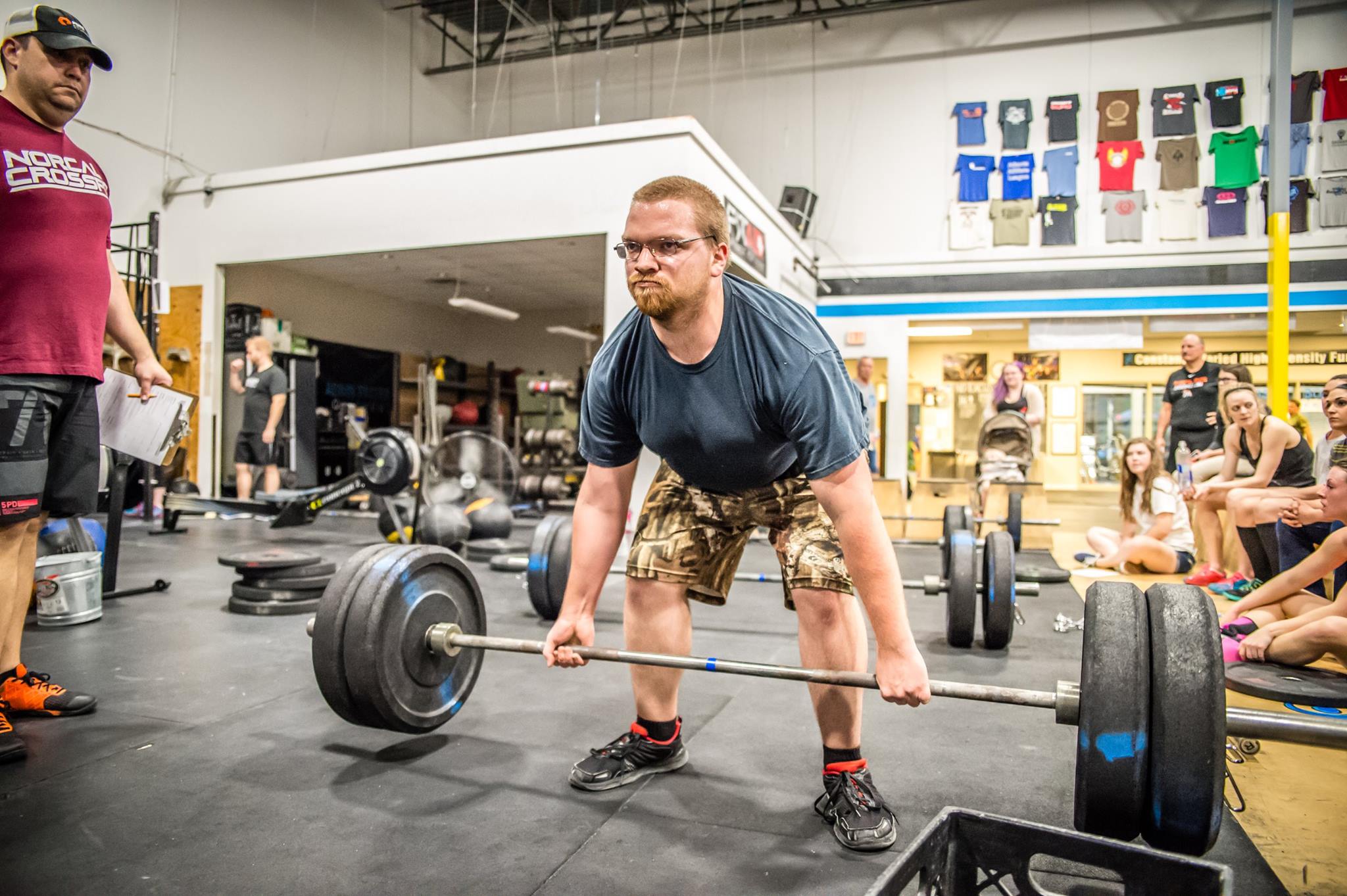 How long have you been doing CrossFit?
“Since June 2015.”

How did you first discover CrossFit and what made you decide to start?
“My coworker Jamie talked my other coworker Hilario into joining NEA. After months of bugging me, I caved and signed up.”

Tell us about your sports/fitness background:
“I did a lot of different sports throughout middle school and some high school, but I found my love for swimming sophomore year of high school. I swam competitively and was briefly the head swimmer of the team. I had the county record for fastest 50m freestyle (accidentally, long story) for about two years before some kid took it! I also did performing arts for two years (yes, that is fitness!).”

What sorts of positive changes (mental, physical, emotional) have you noticed in your life since getting involved at No Excuses?
“I had back issues, I was pre-diabetic, and all I did was work all day in front of a computer, and play all day in front of a computer. Now, my back feels fine, I’m no longer pre-diabetic, and I can actually move around without feeling out of breath. Five years ago, I was 145 pounds. I was very thin, with almost no muscles. Two years later, I was at my biggest, weighing 260 pounds. Now thanks to CrossFit (and Coach Jeremy for nutrition help), I am 230 pounds and a LOT stronger than 18 year old me.”

What keeps you coming back and motivated?
“Seeing my progress every benchmark. Even more, seeing friends’ progress. Watching the progress of those who previously struggled with a weight, and then performing it like the weight is nothing. Every day I’m excited to see how well friends (and myself) did on a particular movement or WOD. Simply knowing every individual at NEA, no matter their skill level, giving it their all, keeps me coming back.”

In what other ways do you use your fitness?
“Every Saturday my wife ‘forces’ us to have family time. Almost every time, we go to the park with our 3 ½ year old son (whom almost everyone has met). I can actually sit without my back having problems. I can climb and run around with him without being out of breath, and I can throw him in the air without throwing out my back. I also like to go up Stone Mountain often. I doubt I could have ever made it to the top without NEA’s help. I still can’t compete with my son though!”

Who or what motivates/inspires you?
“Foundations! The cool thing about showing up at 6pm is you get to see the kids, teens, and foundations too (down side, it’s crowded). When I see Coach Jeremy walking across the gym with a new member, it’s inspiring. That used to be us. The folks in foundations are going through the most challenging part: getting started. When I started, Coach Jeremy and the other guys in my foundations thought I was going to die. We all know the, “hey, this is an intense workout” moment, and how difficult that hurdle was to cross. If they can push themselves to get past that moment, we can push ourselves to do anything!”

Please share with us a favorite CrossFit or No Excuses moment.
“I have two, so I’ll cheat. First, THE DEADLIFT! I have tried for almost a year to build up to 400 deadlift. The June benchmarks, I didn’t make it. Last benchmarks, I failed the first time and walked it off. My wife and son were there. Finally, I tried a second time. I didn’t overthink it anymore, I just picked it up, and I did it! It was the proudest moment I’ve had in years. Second, when Jamie, Hilario, and I wore shirts of each of the three stooges because of a funny comment Coach Brandon said the previous month. He saw us walk in, turned around, looked back again, and began laughing. Worth it!”

Name one goal you would like to achieve in CrossFit.
“I try to have two at a time, and get two more after I complete those, but my first goal is to get on the PR board for Front Squat, which I’m only 10 pounds under making the current list!”

Tell us about your hobbies and interests outside of the gym:
“This may be a shocker as a game programmer, but I like games (*gasp*). Aside from that, I play the guitar…kinda, I swim, I love musicals, and I’m a beast at air hockey!”

What advice do you have for someone just starting CrossFit or is on the fence about starting?
“CrossFit is the most satisfying sport you could join. The coaches are knowledgeable; the other gym members are encouraging, and the positive results are undeniable. You’ll feel better, look better, get stronger, and get faster. Your fellow CrossFitters will cheer for you along the way!”

What do you love most about No Excuses?
“The community. We don’t have ‘gym-heads’ here. Everyone, regardless of skill level, encourages one another to keep pushing and get better. And, Coach Brandon has a pretty good sense of humor, I guess.”

Coach Brandon’s Take:
“When Kyle showed up to do his Free Assessment in jeans, I didn’t know if CrossFit would be a good fit for him. I’m glad he has proved me wrong. Kyle is your ideal member in that he’s hungry to get better and push himself, but he’s also cautious in doing too much too soon. For more than year, he’s been one of our most consistent members and has improved tremendously, especially in weightlifting. But the best part is he’s improved his overall health and some of the health issues he’s had over the years have improved.”